6WINDGate 5.0 Architecture: Are You Ready For 5G?

This is the second blog post in our series that explains the benefits of our new 6WINDGate 5.0, which has been selected by the world’s largest OEMs to build 5G networking solutions. As described in the first blog, 6WINDGate implements a complete integration of its Fast Path with Linux to benefit from the latest Linux kernel improvements. As a summary, Linux running 6WINDGate is Linux. In this post, we will detail 6WINDGate 5.0 architecture and how this architecture makes 6WINDGate’s accelerated data plane transparent to Linux applications, which is critical for efficient 5G networking. 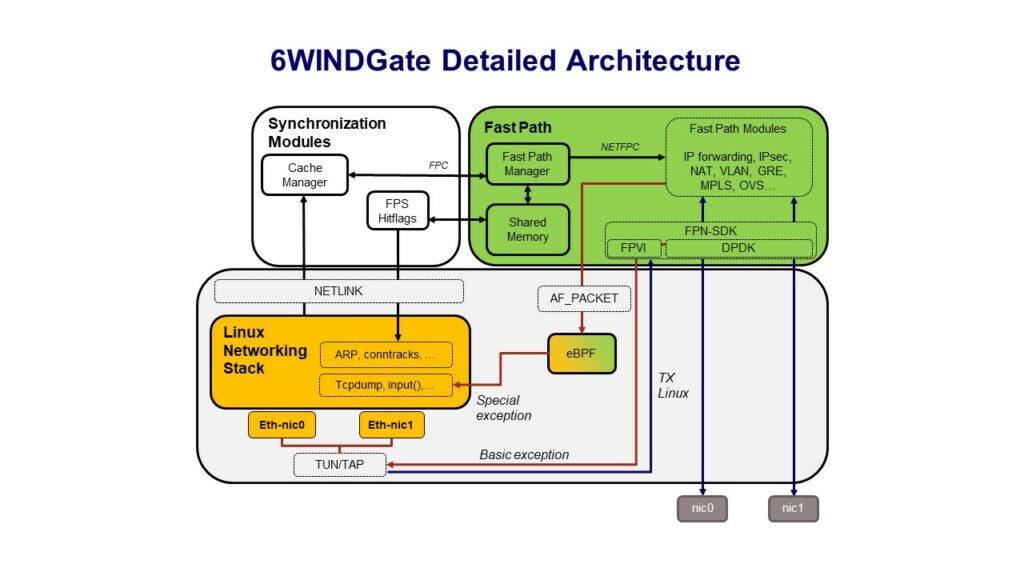 To achieve Fast Path transparency to Linux, 6WINDGate implements what we call “Linux – Fast Past synchronization”. It relies on two mechanisms: exception strategy and continuous synchronization.

When local information is missing in the Fast Path to process a packet, when a packet type is not supported by the Fast Path, or when a packet is destined to the local Control Plane, then it is diverted to the Linux Networking Stack. These packets are known as exception packets and this mechanism is called the exception strategy.

Two kinds of exceptions are defined according to the process to be applied on the packet:

For example, a Basic Exception is raised when the route lookup fails during simple IP forwarding.

The purpose of the FPVI is to:

The FPVI is implemented in Linux using the TUN/TAP driver, and in the Fast Path through the FPN-SDK using the DPDK virtio-user PMD providing a virtual port to each TUN/TAP interface.

Packets to be sent locally by the Linux Networking Stack are directly injected in the outgoing flow to be processed by the Fast Path, using the TUN/TAP Linux driver.

The FPVI implements the exception strategy as follows:

The mechanism for Special Exception makes use of eBPF programs.

eBPF (extended Berkeley Packet Filter) is an extension of BPF that was initially designed for BSD systems to filter packets early in the kernel to avoid useless copies to userspace applications like “tcpdump”. Thanks to networking hooks like Traffic Control (TC) and eXpress Data Path (XDP), eBPF extends BPF to network filtering, for example to implement anti-DDoS, or to model hardware components.

An eBPF program is a C-like program using the uapi/linux/bpf.h Linux kernel API. A compiler translates this program into eBPF assembly instructions. This binary can then be loaded into the kernel, verified by the kernel to make sure there is no loop or non-authorized memory access, and finally executed.

In 6WINDGate the role of the Special Exception eBPF program is to drive the packets to the right hook inside the Linux Networking Stack for further processing aligned with the work already done by the Fast Path.

The Fast Path sends a Special Exception via a dummy interface to which the eBPF program is attached with TC. To specify which operation is needed on the packet, meta data is attached to the packet, by means of a specific trailer, called FPTUN. For example, the trailer is filled with the interface index to which the packet should be injected. Therefore, the eBPF program responsible for special exception processing is called the FPTUN handler.

The following figure is an example of GRE packets being processed by the Fast Path.The Inner TCP packet should be delivered to the application as coming from the Linux GRE interface. 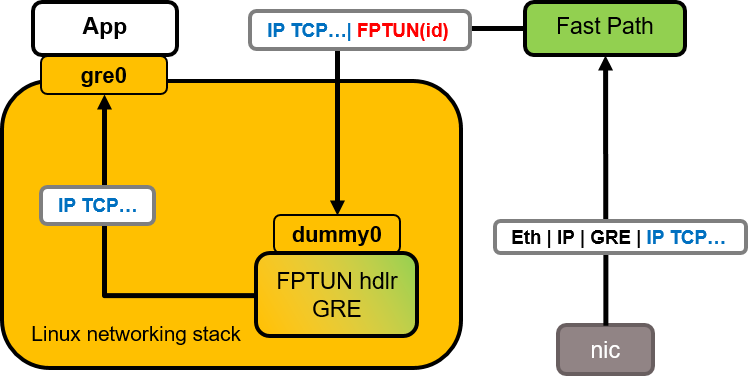 The value of the interface index is known thanks to the Linux – Fast Path synchronization mechanism.

The update of information by the Fast Path Manager for Fast Path modules can use two different mechanisms:

For instance, an IKE deamon like StrongSwan can rely on up-to-date XFRM statistics, without any patch, even though all the IPsec traffic is being handled by the Fast Path.

For other type of management applications, APIs are provided to collect both Linux and Fast Path statistics of interface and IP MIB.

Some kernel objects like ARP entries or conntracks follow a state machine that depends on the usage by the Linux Data Plane. As packets are processed by the Fast Path, Linux is not aware that these entries are used, and a mechanism is needed to prevent them from expiring.

This is the role of the Fast Path Hitflags mechanism. As a result, the state of kernel objects remains alive as long as the Fast Path is actively using them and the packet processing remains steady in the Fast Path.

Statistics / Hitflags are implemented through the following mechanisms:

6WINDGate 5.0 customers have already selected our new architecture to build their 5G networking solutions. Stay tuned for the next 6WINDGate 5.0 blog in this series when we will share more about our new Container support. In the meantime, please Contact Us for any questions.